Our Mission: Representing and supporting the Harcourt Community

We are  a member based organisation with a mission to effectively support and represent the Harcourt Valley Community, always striving to support the Community develop in a vibrant, sustainable and inclusive way. 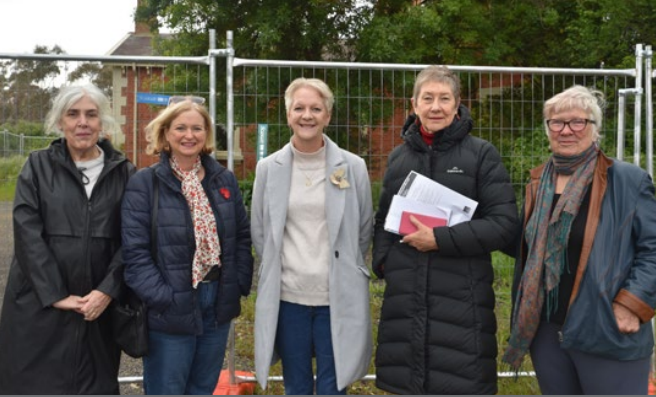 Members of the Harcourt Progress Association sub committee gathered outside the old Harcourt Railway Station on Wednesday 2 November to receive some very welcome news from Maree Edwards, sitting member for Bendigo West and Speaker of the Victorian Legislative Assembly.

Should the Labor Government be re-elected after the state elections, it has pledged $50,000 to HPA to help the Harcourt Railway Station Neighbourhood House become a reality for the Harcourt Community.

HPA stalwart and highly respected Editor of The Core, Robyn Miller said, ‘This is a dream come true for the Harcourt Progress Association which has been working on the concept of a community house for our community since 2017.

‘In 2018, the money set aside for renovations was deployed elsewhere and the project went into limbo. The pandemic exacerbated the inability to move on the project, however, in May 2021, Maree Edwards announced that the project was “alive” again. Thanks to the tenacity of the HPA committee, VicTrack’s willingness to honour its original intentions and Mount Alexander Shire’s commitment to the project, it looks like we will be installed in the station within a matter of weeks.’

The old Railway Station has now been completely renovated and it is only a matter of time until the complicated business of signing leases and sub-leases is finalised. Mount Alexander Shire, as the head tenant, will need to go through some legal procedures to sub-lease the station building but hopefully these are only formalities.

Once the leasing arrangements have been completed, the HPA will be consulting with the Harcourt community to find out what can best be offered. ‘We are already brimming with ideas’ said Vera Hemkes. ‘Many of us are looking forward to setting up a community garden in the land next to the station.’

The Harcourt Progress Association acknowledges the Dja Dja Wurrung people as the traditional custodians of the land on which we meet, live and work. We pay respect to Elders past, present and emerging.